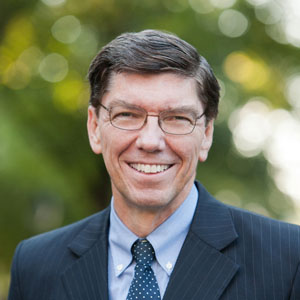 Professor Christensen holds a BA from Brigham Young University and an MPhil in applied econometrics from Oxford University where he studied as a Rhodes Scholar. He received an MBA and a DBA from the Harvard Business School, where he is currently the Kim B. Clark Professor of Business Administration. He is regarded as one of the world’s top experts on innovation and growth.

Christensen founded a number of successful companies and organizations which use and apply this theories in various ways: Innosight, a consulting firm helping companies create new growth businesses; Rose Park Advisors, a firm that identifies and invests in disruptive companies; and Innosight Institute, a non-profit think tank whose mission is to apply his theories to vexing societal problems such as healthcare and education.

Professor Christensen is the best-selling author of nine books and more than a hundred articles, including the New York Times best-selling, How Will You Measure Your Life? He received the Global Business Book Award for The Innovator’s Dilemma and The Economist named it as one of the six most important books about business ever written. In 2011 and again in 2013, thousands of executives, consultants and business school professors were polled and named Christensen as the most influential business thinker in the world

Professor Christensen was born in Salt Lake City, Utah. He worked as a missionary for the Church of Jesus Christ of Latter-day Saints in the Republic of Korea from 1971 to 1973 and continues to serve in his church in as many ways as he can. He and his wife Christine live in Belmont, MA. They are the parents of five children and grandparents to five grandchildren.