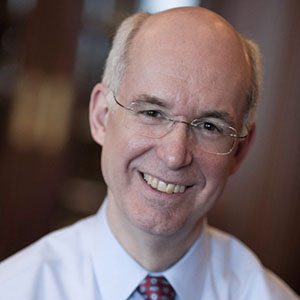 Bringing Industry and Academia Together to Create Value

Serving more than 3,400 students and 46,000 alumni, the Questrom School of Business pursues the vision “Creating Value for the World.” The School has transformed its undergraduate and MBA curricula, with a focus on ethics and global citizenship, and sectors that are dramatically impacting the world economy—health and life sciences, digital technology, sustainability and social enterprise.

Ken began his career at Corning Incorporated in 1972, progressing through the financial function before leading several businesses. He joined Corning Clinical Laboratories in 1995, and the company was spun off from Corning as Quest Diagnostics Incorporated soon thereafter. He led the dramatic turnaround of Quest Diagnostics as chairman and chief executive officer through 2004. Exceptional value was created for shareholders by executing a dramatic financial turnaround, establishing industry leadership, demonstrating effective growth through acquisition, and driving organic growth. Quest Diagnostics provided the third highest five-year shareholder returns among the Fortune 500 (1999-2003) and in 2004 was named to the Business Week 50. Market capitalization increased from approximately $350 million at the time of the spin-off to more than $9 billion.

A study of global business leadership conducted at INSEAD and published in the January 2013 issue of the Harvard Business Review named Ken one of the 100 best performing CEOs in the world.

Ken joined Kohlberg Kravis Roberts & Co. (KKR), in 2005 and served as a managing director and partner until his appointment as Dean at Boston University. From 2010 through 2013, he was a senior advisor to KKR, serving on the firm’s portfolio management committee.

Ken is a former member of the Healthcare Leadership Council, and the American Clinical Laboratory Association (chairman). He is the former chairman of The ARTS of the Southern Finger Lakes and the Corning Philharmonic Society, and a former trustee of Elmira College and the Fifth Avenue Presbyterian Church in New York City.