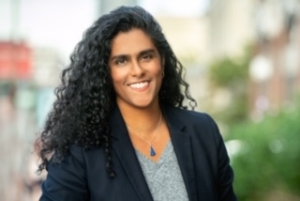 Meghna Chakrabarti serves as host and editor of On Point from NPR and WBUR, along with David Folkenflik. Based in Boston, she is on the air Monday through Thursday.

She is the former host of Radio Boston, WBUR’s acclaimed weekday show with a focus on news, in-depth interviews with extraordinary people, and analysis on broader issues that have an impact on Boston and beyond. She also served as the primary fill-in host for Here & Now, NPR and WBUR’s co-produced national midday news program. And she is the host of Modern Love: The Podcast, a collaboration of WBUR and The New York Times.

Radio Boston has been frequently recognized for journalistic excellence by many of the nation’s top journalism associations. In 2018, the show won a regional Edward R. Murrow award for best news documentary for its complex, nuanced coverage of the 100th anniversary of John F. Kennedy’s birth. The show has twice won the best large market talk show award from the Associated Press of New England. For three consecutive years, the national Public Radio News Directors Inc. (PRNDI) awarded Radio Boston its top prize for large market talk shows, citing the particular mix of intelligence, analysis, and personal voices in Radio Boston’s coverage of the 40th Anniversary of Boston’s Busing Crisis, and Special Coverage of the Death Penalty Decision for the Boston Marathon Bomber.

Before taking the helm at Radio Boston in 2010, she reported on New England transportation and energy issues for WBUR’s news department. She also produced and directed On Point for five years.

The Asian American Journalists Association awarded Chakrabarti and her team the national excellence in radio/audio award for Radio Boston’s special series on the eviction crisis in East Boston.

Chakrabarti has won awards for individual reporting from both the Associated Press and the Radio Television News Directors Association for her writing, hard news reporting, and use of sound.