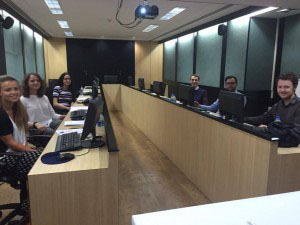 We landed in Mumbai in the afternoon, where we were picked up and taken straight to the guesthouse. We were greeted by several very enthusiastic members of staff, who practically force-fed us a huge selection of curry the minute we walked through the door. We met our delegates from Groningen and Boston and then, jetlagged after our delayed flight, headed to bed for an early night.

Having had a good night’s sleep and, falsely believing that we had recovered from our jetlag, we headed out to explore the local area. The first thing we noticed was how crazy the roads here are, resembling a particularly aggressive game of Mario Kart. We made it about 200m from the guesthouse before we realised that at some point in the next six weeks we would have to risk life and limb and cross the battlefields that are the Mumbai roads. After about 5 minutes worth of feeble attempts to ‘make it halfway and wait’, we decided to man up and made a run for it. We quickly learnt that this is the only way to get around. Whilst walking we had our first taste of monsoon weather (which we were thoroughly unprepared for) so decided to head back to the guesthouse. Luckily, we had accidently walked in a huge circle and made it back in no time at all.

We had our first day of work, where we met all the staff at NISM and were introduced to the company. Everyone was super friendly and we w

ere delighted to find that the staff bring round cups of chai tea at almost hourly intervals throughout the day. One of these rounds was served with crisps and biscuits in a thoughtful nod to the British culture, much to the shock of the local staff. The highlight of the day was probably the hairy rickshaw commute with several adrenaline-inducing close calls with fearless buses. In the evening, we were all jet-lagged and exhausted so we stayed in and watched the football (sorry for the reminder Will).

Work was good, but the day was stolen by the discovery of staggeringly cheap beer at Tight Bar – a fluorescent haven with a noughties-Bollywood fusion soundtrack and entertainment in the form of Mr Bean playing on the big screen.

Work was slow to start with but we all enjoyed our orientation on the Indian culture, banking system and politics. After work, feeling slightly worse for wear, we decided to recover by doing some exercise. We found a lake nearby and whilst completing two laps of it, discovered it was a popular hangout/ make-out spot for local teenagers who seemed to find our very western neon fitness outfits rather amusing. As we strolled back, suffering in the humidity, the monsoon came to our aid and gave us a much-needed impromptu shower. When we returned to the guesthouse completely drenched, the security guards made little effort to hide their amusement at our naivety and lack of waterproof clothing. We returned to (yet again) a feast of vegetable curry, and discussed our longing for red meat and cheese.

After a busy morning at work of further lectures on India, we were treated to an afternoon spent watching a fantastically cheesy and very long Bollywood movie called ‘3 Idiots’. Although we didn’t always understand the humour, or the need for so many unanticipated breakouts into song and dance, we were thoroughly impressed by the sporadic, emotionally deep moments (we never knew that scuba diving was such a soul-searching experience that it required a 10 minute of atmospheric instrumentals to a montage of a man crying). In the evening, we went in search of a contender against the classy establishment that is Tight Bar. Although this is a difficult task, we found a close runner-up in Royal Oak Brewery, which offers cheaper drinks to ladies, along with an entirely Bryan Adams themed playlist, which we felt was a reflection of the unsurpassable taste of the in-house DJ (yes, a DJ did this to us).

Today, things got a little bit more serious at work. We delegated projects based on the extensive research and data that NISM have offered us on the topic of financial literacy and financial inclusion. We also had an interesting unplanned debate with Sandeep (another supervisor), about Brexit and his interpretation of the consequences for capital markets. Tonight, we are heading out to continue our immersion into Indian culture (desperately searching for anything but curry) and our quest for a better ‘cheesy music and aged British comedy orientated’ bar than Tight Bar.