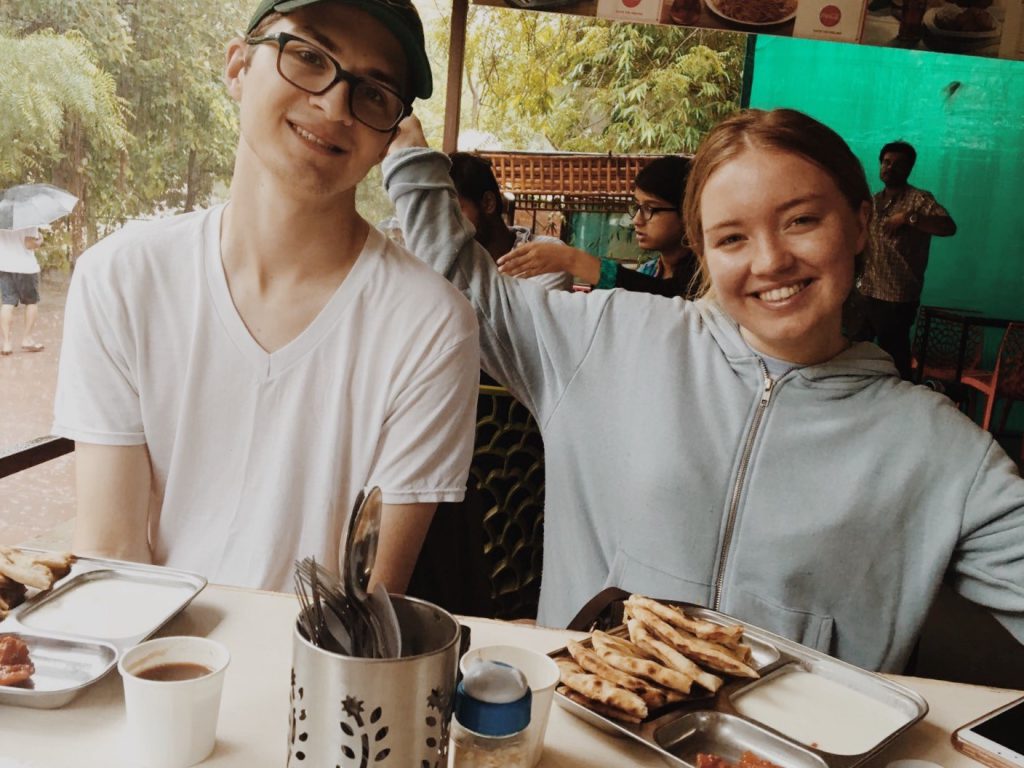 name is Nathan. I am Boston University student entering my third year of college this fall. This week we did lots of things around town in places we have never been to and visited a couple of old favorites in our never-ending pursuit of the tastiest bit in town! Our week consisted of mostly working independently in the mornings and venturing out of campus at the end of the day to try new restaurants suggested to us by the IIM-A students.

This Saturday we joined several summer school exchange students along with a few members of the Heritage Club on campus on a walk around the old city. We made our first stop of several at the Siddi Saiyad Jali Mosque which is the oldest mosque in all of Ahmedabad. It was a beautifully simplistic structure that had a three-walled concept where the rear side of the mosque was open to the air. The structure had a carved stone window in the rear of the mosque that has since been adopted as the local symbol of Ahmedabad. We then proceeded to walk through the streets of central Ahmedabad to see the Bhadra Fortress and through a small market to the Jumma Masjid Mosque. The Mosque is enormous and was the largest Mosque on the entire Indian subcontinent for several years! We walked around the Mosque for about half an hour and then made our way to Ahmedshah Badshah’s Tomb, for which the city is named after. Only men were allowed into the innermost sanctum, with their heads covered, where the tombs of the late leaders lay. We finished off the great walk with a dining experience at the Manekchowk Market. Amongst the chaos and bursting tarps full of rain water precariously hovering over our heads as we ate we were seated and given food. We were served Poha, a type of bread, and a tomato sauce with a healthy knob of butter in the center of the sauce. We also had a meatless version of Dosa and some Thumbs Up Soda to drink. We were then given “Mango Ice Cream Sandwich” which was white bread without the crusts and traditional Indian ice cream. Then another layer of bread is added which is where the Mango sauce is added and a nice helping of shredded cheese. To say the least we were all confused. They paired that sandwich with a chocolate cheese sandwich which was less confusing due to the overpowering nature of the chocolate of which there was a fair amount on that sandwich. It was a fantastic night all around and meeting all the other transfer students was a welcome delight.

Over the next few nights we continued to eat around town and visited Jassi De Paratha for lunch and got it delivered several nights later for dinner. I think we have found a dish we are all fans of. We also went out to dinner at Hyderbadi Hut with some friends we met on the heritage walk. We had several Biriyani between the six of us and had a few other local foods. The following day we went to Punjabi by Heart and ate some Cholle Bhatura and some curries. I had some Mango Lassi that was chilled into almost a custard like consistency that was very refreshing. We even managed to slip in a night of Indian Dominos which was strikingly similar to the US and UK Dominos. To say the least we had a very diverse array of meals this week!

On Tuesday Beanie, Shobhit and I went to the office to talk to Rushi, one of our supervisors, about our presentation and the progress of our research. We received good news that we were on track with our direction and that we were meeting the directives laid out by SEWA. This was good news considering that the presentation we have is approaching quite fast. We also discussed the possibility of another field visit which we were very excited about.

Beyond just working and eating we also got to attend the Annual General Meeting that was held for the SEWA Trade Facilitation Centre. We got to see a Google Executive speak along with the founder of SEWA and the current CEO of SEWA TFC with several others. It was super unique just seeing how they structured their meeting around personal experience of the members and not just the high up executives. I found this to be a very unique and fun approach to something I would generally assume to be a mundane activity.

The highlight of the week was when Kristin made us watch the Game of Thrones Season 7 premiere at our favorite Café-the Project Café.  We met some very nice people there and Liv, Beanie and I all discovered that we were missing out on a great show for years now! It was super fun hanging out with other people who liked the show and coached us through the episode. We had a great week over in  Ahmedabad and are even more excited to see what week five has in store for us!