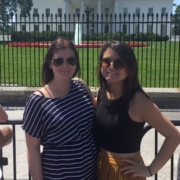 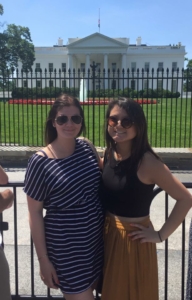 Katya outside the White House

Interned in Television Production at the Voice of America and in Marketing at El Mundo al Día, Summer 2015.

I studied abroad during summer ’15 in Washington, D.C. as a part of the Summer Internship Program. During this summer, I interned for both Voice of America and The Dining Traveler. Voice of America (VoA) is a government-funded international news broadcast service that provides objective news to countries throughout the world that may not have access to unbiased news. Throughout my time at VoA, I worked as a production intern with the Spanish service for all of Latin America. I assisted in the production of the live daily news TV show called El Mundo al Día where I created and edited video that was used for each show. I also worked with the food and travel blog, The Dining Traveler, where I managed social media outlets such as Twitter, FaceBook and Instagram and brainstormed with the blog manager on content for her posts.

One major thing that I learned from my summer in D.C. was how to adapt to a new environment. I had never lived in an apartment-style setting on my own before, so I had to learn how to fend for myself, i.e. cook and clean for myself. I also had to adapt to a new social setting by making new friends and putting myself out there—not to mention adjust to a different professional work environment from what I was used to working in before this summer. Another lesson I learned from living and working in D.C. was the importance of time management. Between two internships, taking classes and trying to explore the city as much as possible, it was a very busy summer! The hardest part of the experience was trying to juggle two jobs, classes and my social life. Although it was so exciting to have so many different things going on at one time and to always be busy, I was not used to having so many things on my plate at a time. Once I started to get overwhelmed, I realized that planning things out in advance and starting to work on assignments ahead of time made it a lot easier to balance my time between work and fun.

The one thing that surprised me the most about my time in D.C. was how much fun I would have in the city. I had been to the city once before when I was younger, and I enjoyed it but did not expect it to be as vibrant as it was when I came back this summer. Not only did I enjoy the nightlife and the social aspect of the city, but also I liked the atmosphere at my job, which was exciting and fast-paced, and the rest of D.C. As you walk down the streets, you can feel the energy of those around you, and everyone walks with a purpose, which was not what I expected when I first got there but ended up being one of my favorite parts of the experience.

The best part of my experience was the combination of having two great internships that I really enjoyed and also having so much fun in the city with the friends I made both in and out of the program. I learned so many new things from both of my internships that I used throughout the summer and will continue to use for the rest of life. I built strong connections with my coworkers and other people I met in D.C. that are irreplaceable and had so much fun with these people. Not to mention, the housing within the city was beautiful and the location was great for exploring the city and going out to have some fun during the free time we did get.

My tips for students who are considering the program would be to prepare for a very busy but exciting summer in a uniquely vibrant city. I would also advise that people wait to accept an internship that they think they would actually enjoy. I was lucky enough to accept internships that I really enjoyed but that was not the case for everyone who did the program. Some people accepted the first offer they received because they were worried that they would not be placed anywhere; although that is a legitimate concern, it is more important to accept an offer that fits your potential career paths or interests you have to make sure you can take something valuable away from this experience professionally.

The one somewhat hidden gem that I would say is a must-see are the national monuments at nighttime. It is beautiful to see the monuments during the day and to learn all of the fascinating history of the city, but it is even more spectacular at night! The monuments look even better when they are lit, and the sites are a lot emptier depending on how late you go. Of course, be careful and make sure you go as a group (which makes it even more fun to go with all of your friends and listen to music while taking in the beautiful scenery).

Kayaking near the Kennedy Center

Katya outside the White House

Katya at the Jefferson Memorial

4th of July near the White House