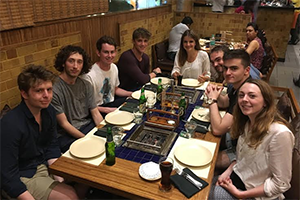 Our second week started off with a well-deserved celebration. After finally focusing our research and fully delving into our projects, we travelled across the chaotic streets of Pune to land in BBQ Nation, a rest bite from curry (the real excuse however was Nick’s coming of age!). The night, characterized by a continuous supply of skewers and unlimited dessert, was culminated with Will’s dance moves in a visit to Miami, a favorite with Pune locals.

The next day, after an early morning struggle, the squad compensated the festivities with some historical sightseeing. The Chatushshringee Temple, dedicated to the reigning deity of the city of Pune, was our first destination. Situated on the mountain side, the view from the summit held a treat, a glimpse of the city from above. We spent the rest of the afternoon walking the streets of Pune, where Jaz and Cristina endorsed another ancient tradition, henna. Although very intricate it was surprising how little time it took to complete.

Midweek the usual work routine was interrupted by the celebration of Eid Mubarak, a Muslim religious festival. The following day we left the office for a visit to Ahmednagar Central Bank, the oldest co-operative bank of the State of Maharashtra. The long bus ride, was made short given the shared stories and interactions with central bankers from a diversity of countries, including Nepal, Sri Lanka and Bangladesh.

During the presentation given by the CEO of the co-operative bank, we could not hide our surprise when first Dom, and then all of us, got presented and awarded a gift, as a gesture of thankfulness for attending the meeting. In contrast to western introductions, the Indian culture showed to be a lot more personal and gracious.

When our meeting concluded, we hopped back on the bus and were taken to a women’s self-help group. As part of any rural ceremony, they granted us the power of concentration, by painting a little red dot in between our eyebrows, and topping the paint off with rice. Paint that we later feared could be permanent due to its high water resistance.

To conclude the week, we were fortunate to meet and talk with Anna Hazare, India’s modern Gandhi. His wisdom and inspirational speech highlighted his motives and actions towards achieving a more sustainable and connected community. Although innovative, ideas such as the ban on tobacco and alcohol may not be very suited to the west … Who can say no to a cold one at the end of the day?

We cannot wait to see what the following weeks have lined up for us. Namaste!