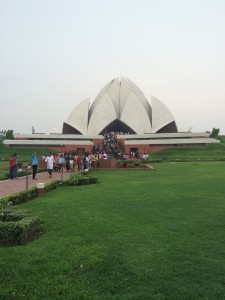 Picking up from the boy’s last post, last Sunday was a busy day of walking through a creepy village, attempting to find a recommended restaurant, where we finally and miraculously ended up after getting lost between several narrow and pitch black streets. Four colourful Bihari platters later, we moved onto the Lotus Temple, where more people looked at us rather than at the actual famous attraction. At around auto num

ber five, and just on time to see the sunset, we arrived at Lodi Gardens (or prime photo-opportunity location), and felt transported into an almost mythical setting where ancient ruins interspersed the neatly kept lawns. Finally, India Gate was the last stop on our rather rigid schedule, as we had gladly taken the advice of an Indian woman who suggested it was best seen at night.

That same night we sat at another table for dinner, which was unheard of considering we had basically assigned seats from the very first evening, and we joked that we would be cursed – it apparently came true the following day.

Andy was ill, and couldn’t take part on our first day of research on the field. On our way back, our car was stranded in an ocean of rainwater – previously the Delhi roads – we were even told that Delhi traffic and road conditions turn into mayhem during monsoon season, yet we found it hard to believe how they could possibly get any more chaotic. Well, we certainly believed it when we were forced to abandon our car and wade through the disturbingly opaque waters to reach the bank of safety, after our driver had decided to risk the floods to skip traffic, causing the car to become grounded in a pothole, waking us up with a jolt. We stood on the bank helpless, except when we again assumed the role of photographers documenting the entire towing process. After the car was
exceptionally quickly towed, again reaching hard-ground, on our treacherous way back paddling through the murky waters, Chris suddenly disappeared. Half of him had been swallowed up by some sort of disguised manhole. However horrific for him, the sight of a smartly suited man drenched and shocked just made us all laugh hysterically, not helping Chris one bit. To top it all off, the journey back to the guesthouse took a staggering 4 and a half hours, at least we had time to dry.

Despite the curse, our field-day conducting primary research on the quality of education at a Delhi government boys 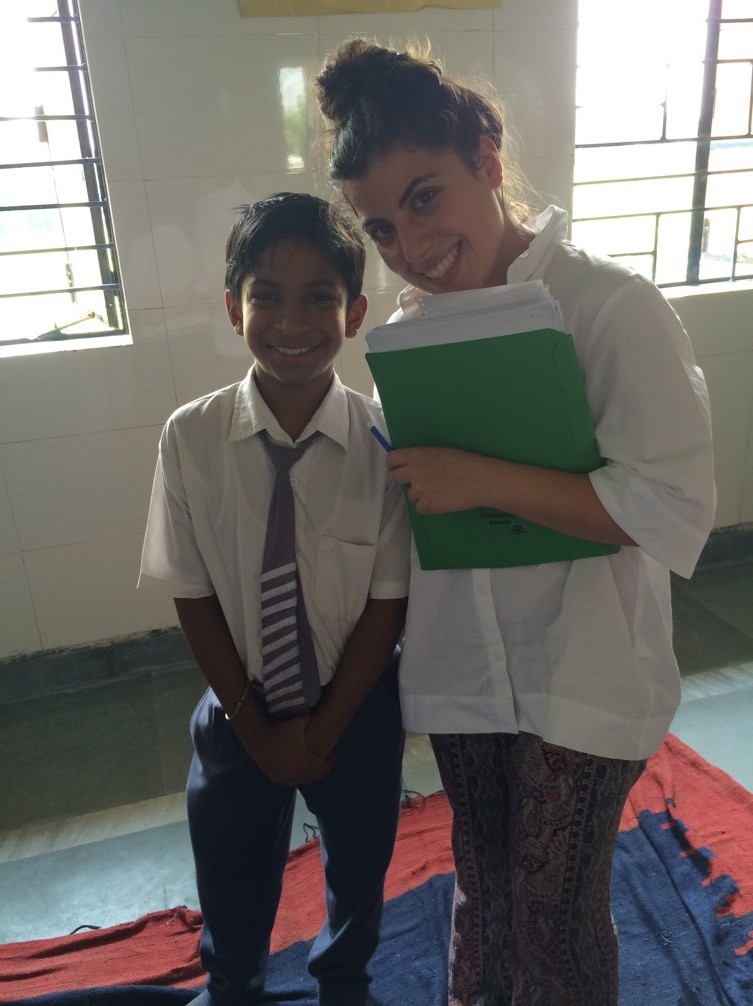 -school exceeded all of our expectations. Everybody we questioned responded extremely enthusiastically and we were able to gather all the results we had hoped for, through questionnaires, focus group discussions and activities designed around the students. The school staff were so welcoming to the point of even repeatedly force-feeding us with homemade Indian dishes we “just had to try”. Several samosas and plates of rice pudding later, we were invited to play cricket. A swarm of children surrounded us, their eyes focused on the ball Andy was about to throw to Chris. We played for a while, with the entire school coming out of their classes to witness Chris’ amazing first go at the game and Andy’s confident proficiency. However, when it was our turn to make a name for us female cricketers, one of us used our rounders skills impressively whilst the other, to put it nicely, failed miserably (we’ll let you guess who is who). The game came to a natural close when the children’s excitement moved from the ball to selfies, turning the pitch more into a mosh pit.

The week continued with more field-visits, ending with another government school in Delhi, this time a much larger and all-girls school. Here we had the chance to survey a larger number of children, and also to facilitate an extremely interesting discussion with teachers, regarding their opinions on the barriers to quality education. Our visits will continue for a few more days, and we look forward to more interesting insights into the Indian education system and, of course, to the inevitable ensuing selfies!

Singapore: Over and Out
Scroll to top