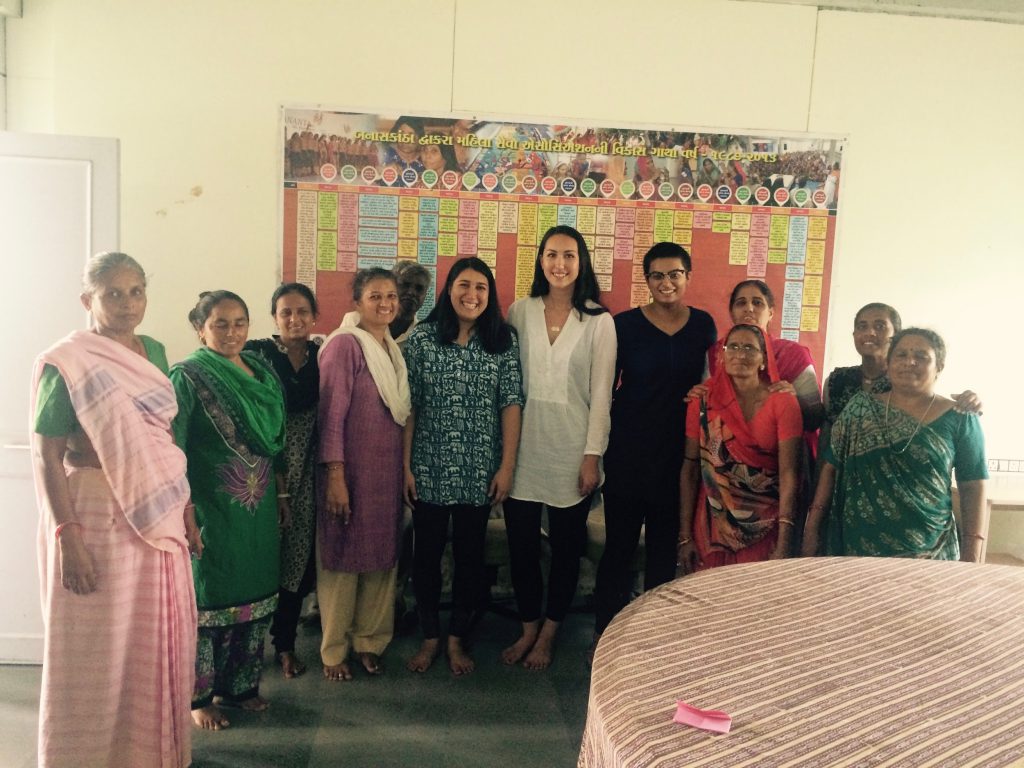 SEWA Radhanpur women and us.

Last weekend we went on our first trip out of the state of Gujurat to Udaipur in Rajasthan. It was our first time taking a sleeper bus in India and boy was it an adventure! We booked our tickets online and set off an hour early to get to the bus stop, knowing we’d get lost. However we soon realised that the address we were going to was taking us way out of town and was definitely not a bus stop! It was midnight and after many futile tries to call the bus company the Uber driver had had enough. Thankfully, he agreed to take us back into town to another address we hoped was the actual bus stop. We arrived at the address 5 minutes before the bus was scheduled to leave and was hopeful that we’d be able to catch the bus in the nick of time. However once we got out of the taxi it became apparent that there was no order to where and when buses came and went. We frantically ran up and down the street following the directions from friendly locals who were sending us in completely opposite directions. Ten minutes had passed so we had to accept defeat!

After we regained our breath, Plan B was to find a ticket office where we could buy another ticket. The ticket office at what looked like a bus station was closed so we hopelessly tried asking some locals. We started talking to a man who knew pretty good English and soon we were surrounded by men trying to help us out (or find out why four foreigners were running around the place like headless chickens). One man insisted that he knew where it was and offered to take us there. We got to what looked like a shop lot on the side of the street and was instructed to sit and wait next to these two girls. They looked like they were waiting for a bus so I asked which bus they were waiting for. To our amazement they were waiting for our 12:45 bus that had been delayed by an hour! We couldn’t believe it!

The bus experience was the equivalent to that of the Knight Bus from Harry Potter. It felt as though we were going to tip on the top bunk, and the horn was the driver’s best friend. When we finally made it to Udaipur, we were relieved that we even made it. We immediately took a rickshaw to the City Palace only to find it closed, so we waited until it was open. We explored the City Palace and Udaipur and then rested at our hostel The Bunkyard, and spent the rest of the evening on the rooftop overlooking the water. That night, the monsoon rains finally hit and we experienced our first proper monsoon thunderstorm. There was a power outage so everyone in the hostel gathered around a single light talking and playing music. It was a great experience for us as we got to converse and share stories of India with others staying at the hostel.

On our second day in Udaipur we visited the Clock Tower and climbed to the very top! Afterwards we put our bargaining skills to the test and purchased some tchotchkes to bring home.

During the week we took a trip to Radhanpur to see the SEWA Hansiba textile museum.  This three and a half hour journey outside of Ahmedabad had many twists and bumps but we enjoyed the journey and scenery on the way there. Once we arrived, we were greeted and immediately shown the museum which displays many communities worth of clothing and blankets. Each piece of textile had its own history, whether it was 150 years old or intricately detailed. We then had a lovely lunch made by the SEWA women. We also had the opportunity to speak with a few of the SEWA women about what they do for the women in Radhanpur and how they started. One very interesting question we were asked, and not expecting, was how women are treated in our respective countries. We came to the conclusion that everywhere women are fighting for equality.