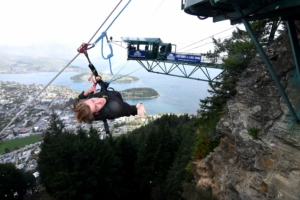 Where and when did you study abroad/off-campus?

What did you do for your internship and what kinds of projects were you assigned (if you had one)?

I interned at the New Zealand International Comedy Festival, where I ran website and marketing analytics, assisted with office admin, and led a team of volunteers during the Festival.

What are two things you learned from your time abroad/off-campus that you may not have learned otherwise?

Mainly just that a workplace functions just as well if shoes are optional. But I guess I also learned that I really don’t need a lot of the things I thought I did; that I can go a week without cell service and the world will keep on spinning, civilization existed before GPS, and that after two days of hiking a cold can of tuna is the best meal in the world.  Also, I know this is three now, but always take the scenic route.

What surprised you most about your time abroad/off-campus?

To be honest, I went in to the program with essentially no knowledge or expectations, and if you’re reading this, then you’ve already prepared more than I did. So I guess it’s equally valid to say either that nothing surprised me, or everything did.

What was the hardest part of your experience?

The bagels. Unless you’re willing to shell out for a diamond coated bread knife and reinforcements for your teeth, don’t bother. But honestly, it was often hard to stay motivated in my classes during the program. Once the internship started, it took up a lot of my time and energy (it took up about 50 hours a week during the Comedy Festival), and it was hard to focus on my Finance class, which was also quite difficult. Additionally, sometimes in the choice between studying and experiencing New Zealand, I don’t think studying is the right choice. Retrospectively, my advice is to avoid taking finance classes, as they are taught much better at BU in my opinion, and make a conscious choice about where your priorities are.

What was the best part of your experience?

The time I spent travelling with friends was some of the most fun I’ve ever had. I got to rappel into a cave and float down an underground river looking at glowworms on the ceiling above, then climb back up the cliff face as a thunderstorm quickly turned it in to a waterfall. I learned to surf, which resulted in me giving serious consideration to dropping out and becoming a beach bum, pulled an all-nighter with friends and proceeded to go white-water rafting on a category 5 river the next day, and saw dolphins, penguins, and seals framed by some of the most beautiful scenery on the planet in the Fjordland. So if you weren’t on board with me saying that studying isn’t always the most valuable experience, you should be after reading that list. 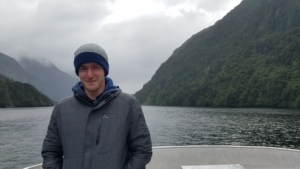 What are your best tips for those planning to study where you did?

First, if you bring a power strip with American outlets, you won’t need to buy as many adapters. Next, don’t be afraid to try new things or initiate trips. Take risks and do things that scare you, whether it’s jumping off a platform with a rubber band attached to your feet or going on an impromptu weekend trip with minimal planning and a tent. The experience makes it all worth it.

Are there any hidden gems that your classmates should check out?

Lake Mirian near Milford Sound. It’s about a 3 hour hike uphill on a loosely formed path in the woods, but at the top you’re rewarded with a pristine lake hidden between two mountain peaks. It’s especially great if you do a morning cruise in Milford Sound and hike afterward. There’s lots of things in New Zealand that you’ll never find on the internet, so just explore. Also, a great weekend trip is taking the ferry from Auckland to Great Barrier Island and hiking the Aotea track.