My team (Justin, Bo and I) are producing real life stories about social entrepreneurs, which will hopefully become part of the first year curriculum at EDI to help inspire the students here. It’s now the back end of week 3, and we’re halfway through the internship. After two weeks of reading, learning and discussing with our supervisor, yesterday my team were finally awarded the opportunity to start doing some practical work towards our project with a two day visit to our first social entrepreneur  having been arranged. Unfortunately, this was an opportunity I had to leave to Justin and Bo, as I am currently dealing with the harsher realities of living in a new continent…

Today marks my fourth bed-bound day, after falling horribly ill last Tuesday. Beyond just a regular stomach upset, this left me wrapped up in bed, in a hoodie and blanket with the A/C cranked up to 32 degrees because I had suddenly started feeling very cold (an unusual feeling in India) and soon after I started shivering uncontrollably. Fortunately this passed after a few hours, and I’ve been slowly recovering since, but just not quite back to full health yet. I would love to be able to issue some words of caution or advice for future interns, but unfortunately I hadn’t eaten or drank anything different from any of the other interns here, and no one else fell sick on the same day. I’m clueless as to what caused it. Luck of the draw, I guess, and one of the inherent risks.

But, I don’t want to end this blog post on a pessimistic note, and I would also like to talk about our weekend trip away last week. We’d decided to get out of Gujarat for the weekend and go visit the very scenic city of Udaipur (in Rajasthan), and it certainly was a welcome break. We visited the City Palace, which is a very interesting and not very typical traditional Indian looking centre piece of the city. The next day we took a cable car up to the top of a big hill (or small mountain, I’m not sure which it was) which had spectacular views of the city. We (thankfully!) also had beer for the first time since we left, because alcohol is illegal in the state of Gujarat, although as we’ve heard, it does not actually stop people. However, oddly, despite being legal in Udaipur, you won’t find beer on any menu and the charge is disguised on the bill as an abbreviation or increased tax…. fishy!

In Udaipur we also discovered other foreigners, which in Ahmedabad to call rare would be generous, and it left us staring at them as much we get stared at in Ahmedabad. In Ahmedabad, we’re quite the novelty, people want to talk to us, take photos with and/or of us, poke us or just very politely continuously stare intensely at us. Occasionally the people who approach you will be after some money, through begging or persistent selling; however, I would dare say is not as bad here as it is in the tourist hot spots. Here, in fact, locals have helped us out on a couple of occasions when rickshaws have attempted to overprice us, as I’m told there is currently a movement to fight these kinds of behaviour as a part of the population want to improve India’s international image. It is for the sake of those people that you end up haggling over pennies.

Overall, on weekdays when we’re stuck at our slightly secluded campus, with the repetitive food, seclusion, painfully slow internet, the lack of a way to get a little taste of home as literally everything has been changed for the Indian pallet (not even Snickers or Coke tastes the same, and all the crisps are flavours you’ve never heard of, and even the ‘most authentic’ foreign food restaurant in the area mixes things up. I ordered Bolognese, what I got was indisputably Arrabbiata) and other minor things start to hack away, day by day, at your admiration and patience. But on the weekends however, when you venture out to the city or elsewhere, and you get to eat amazing food at vibrant street food stands, haggle with auto drivers, mingle with the curious locals, see incredible buildings with architecture you’d never find at home, and see sights like cars driving the wrong way, four people on a bike, a complete disregard of queues, sights that the locals simply dismiss as “this is India” when you question them about it. That is when you really grow an affection for this place, which I have. I can comfortably say I love this country and can’t wait to explore it further. 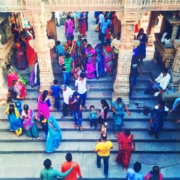 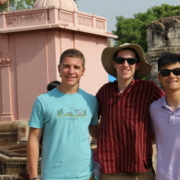 Ahmedabad, India: An Introduction to a New Place
Jewel of the East: Week 3 at RBI