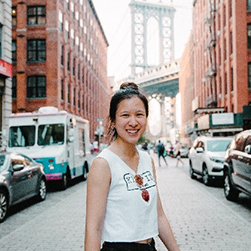 Before starting her college career at BU, Vanessa earned high recognitions at the high school level, excelling in the classroom and being recognized as the Salutatorian of her class. She also earned an AP International Diploma, an honor high school students receive for earning at least a 3 on five or more exams. Outside of the classroom, Vanessa was heavily involved in the Model UN program at her school, competing in Yale’s conference and traveling to Beijing for Harvard MUN China. She was further rewarded for her hard work during college admissions season, receiving a Presidential Scholarship to attend BU.

While the scholarship was certainly helpful, there were other key factors that played a role in her decision.  Vanessa knew that she wanted to go to school on the east coast, and really enjoyed her time in Boston learning about the city’s rich history. Joining the BU community really became a clear decision after she realized how many different concentrations were available to students, as well as the very developed study abroad program. All these factors allowed her to make what she considers “the best decision ever,” joining the Questrom community as a member of the class of 2019!

Since Coming to BU

Since joining the BU community in 2015, Vanessa has become heavily involved in a wide variety of clubs and organizations, including being the Marketing Chair for LOCK, joining BU Tae Kwon Do, and being an active member on the HP Advisory Board. On top of these responsibilities, she is also a volunteer for BU Habitat for Humanity and took on the role as President during the 2017-18 school year. While all of these activities certainly keep her busy, Vanessa does like to work on her lettering and calligraphy during any free time. She loves working with new media and writing on anything she can get her hands on.

Taking this creativity into account, Vanessa decided to take a “leap of faith” and declare as a Marketing and Retail concentrator. While there isn’t much exposure to either of these concentrations built into the Questrom curriculum before junior year, Vanessa felt that being a very creative and analytical person would fit perfectly with the Marketing concentration. In terms of the Retail side, she has always been interested in tangible products and how much the retail landscape in the US has been changing, so the Retail concentration seemed like a natural continuation of these interests. Recently she put her knowledge gained from these two concentrations into the business field, working at Bose Corporation this past summer. As a Global Sales and Marketing Intern, she worked directly with account managers for Best Buy, Amazon, Target, and others to work on independent projects. These covered various marketing challenges, including SEO, digital marketing tactics, and the online shopping experience.

In terms of HP, Vanessa considers joining this program as her biggest accomplishment thus far. She states that joining honors has really instilled a new sense of confidence in her, and has opened up doors to some incredible opportunities, including the trip to Chile! Chile was a very special experience for her, as she traveled to her hometown with 24 bright minds, seeing the place she grew up through a completely different lens. The trip also allowed her to build even stronger relationships with the Honors Program students, something she is especially grateful for.

Goals for After College

As for Vanessa’s post-BU career, she hopes to start off in the marketing department of a physical goods company, using her data analytics skills as well as creativity to develop marketing strategies for the firm. Doing something where she can develop her creative side and feel challenged every day to grow and improve as an employee is Vanessa’s main goal at this point, which hopefully will help her gain skills that can translate into her ultimate goal of starting her own company. Ultimately, whether it’s a product or service based company, Vanessa simply wants to have the opportunity to help other people in some way, shape, or form. Starting a business from scratch is a tall task, but Vanessa’s mission in this pursuit will always be to “help people become a better version of themselves, and leave my mark in the world.” Everyone in HP already knows what a creative person Vanessa is (as shown by her very popular name cards at the Welcome Brunch), and now we can all look forward to her bringing that creativity to the working world.