Each summer, through our summer orientation program, I get the chance to meet excited – and nervous – students and their families as they are beginning their college journey. It is one of the things I really like about the structure of orientation at Boston University; students and parents come to orientation weeks, and sometimes even months, before the actual college experience begins. Why is this cool? Because it allows the rest of the summer for families to have the follow-up conversations about how things will change when college begins.

There are so many things that are ripe for discussion and, frankly, planning.

How many times each week or – OY! – each day do we talk on the phone? Does texting count as talking?

How specifically do we talk about how classes are going? Is there an expectation that exact grades on papers or tests are to be shared?

Here’s a tough one…what do we think about drinking? (Let us not be so naïve as to think that there is never access ever to alcohol by underage students.)

Is it a good idea to get a part-time job? How will money be handled between us?

Homesickness. How do we handle it? For that matter, “kidsickness?” (Not to be underestimated is the transition for the parent. I have seen many have a much harder time with the transition than the college student him or herself.)

Then of course there are the larger, more substantial questions… What are the goals for this first year of school? What is important? What does “success” this year look like?

When I talk to students and parents at orientation, I always mention the importance of these conversations, and how lucky they are to begin thinking about and discussing these issues NOW. Even just driving home from the two-day orientation program and asking the simple question of “So, what did you think?” can open a huge door for dialogue. And who initiates, kid or parent? Who cares? These are important questions for or from either. The whole point is to establish a discourse that can continue throughout the summer and into the school year, one that will help to create a shared understanding of expectations on these and other issues. This is not to say that you can head off any adjustments or hurdles, but you can come to agreement – or at least compromise – on what some of the answers will be. I might add, how you will talk about and work through the unanticipated, the unplanned.

There is no one path for success, but you can create your own blueprint for communication in this next phase of the parent-child relationship. And, if I may be so bold, it is generally best to not wait until that final drop-off at the end of the summer.

While I like the fall and spring seasons best, perhaps like most true Northeasterners summer brings the joys of a true vacation. Many think that anyone who works at a college has the summer off, and though that is actually not the case for most administrators like me or my team, we do try to take some vacation time – to refresh and recharge. And that is key. It is well borne out in research that “less is more” when it comes to work productivity; in other words, taking time off makes for better work outcomes.

Let’s rewind nearly 100 years: in the 1920s, Henry Ford reduced the work week of his auto production factories from six days (48 hours) to five days (40 hours), after finding that the productivity returns diminished steadily after the workers put in eight hours a day for five days a week. Ford said, “Just as the eight hour day opened our way to prosperity, so the five day week will open our way to a still greater prosperity.” And this has been backed by extensive research over the ensuing decades. 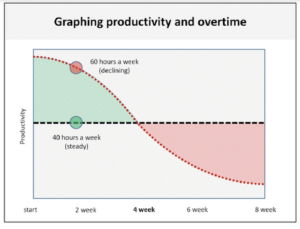 I’ve done some research in flexible work environments, and have found that such arrangements can indeed increase productivity – though the opportunities obviously are relative to the place and nature of the work. For example, research shows that “compressed work weeks” (like a five day schedule being consolidated into four days) can reduce absenteeism and increase productivity anywhere from 10 to 70 percent. And studies have shown that short breaks allow people to maintain their focus on a task without the loss of quality that normally occurs over time. Moreover, Google has employed a “20% time” approach, wherein their employees spend one day a week working on projects that aren’t necessarily in their job descriptions – to develop something new, or fix something they see as broken, or really most anything. The 20% time approach has brought about serious innovations such as Gmail, Google Reader, and more. (Full disclaimer: it was reported a while back, though both unsubstantiated and disputed, that Google may have killed this workplace perk, one that has been considered as a real competitive advantage to the company.)

Back to the theme of vacation: for several years now, Netflix has abandoned typical policies for a “sky’s-the-limit” approach. Essentially, Netflix employees can take as much vacation as they want assuming their work is accomplished, embracing the notion of gauging success by focusing on what employees get done, not on how many days they work. According to Netflix CEO Reed Hastings, keeping vacation unlimited requires mature, responsible employees who care about high-quality work. I have read that there was a bit of initial trepidation that this policy shift might engender the occasional abuse, but in fact they saw the opposite: people had to be pushed to take advantage of this change. And Netflix isn’t alone with this kind of HR policy. Human resources association WorldatWork reports that 1% of companies are now offering unlimited paid vacation days; this may be a tiny percentage, but meaningful nonetheless. And to ensure that people are really unplugging – since a recent survey of 1,000 U.S. workers indicated that most people check emails and take phone calls while away, sometimes multiple times a day – many companies are actually incentivizing vacation: Evernote began offering employees $1,000 spending money once a year to take at least a full week off at a time, and the small company FullContact offers “paid paid vacation” to its employees. Once a year, each staff member gets a $7,500 (this is enough for a family of four to have pretty a legit vacation) to literally go away…provided they disconnect from technology and do absolutely no work while off.

All of these principles are fundamental to student learning as well. Our students need to take time to reflect on the knowledge they are gaining inside the classroom and through active work opportunities. They too need downtime even if just the weekend – just like the employees at Evernote, FullContact, Google, and elsewhere – to recharge and rejuvenate, so that they can come at things with fresh eyes and renewed energy.

Reed Hastings cites that he works hard to be a good role model and take vacations, especially because he sees this as key to his ability to think creatively and innovatively at Netflix. And I can relate; I do some of my best thinking and planning when I’m refreshed and have been able to detach a bit and see the broad picture. I am more than happy with the vacation benefits at my work, though frankly I have to get better at actually “vacating.” I am one of those people who does check email and even hold calls while allegedly on vacation, and yes, even daily. But I’ll say this: the calls and email are much better from a kayak!