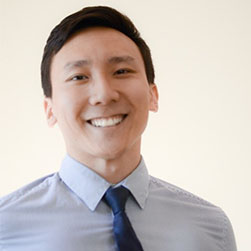 Andrew is a Software Engineer at Morningstar, an investment research firm that provides tools and data to investment managers. He works on a variety of different tasks, but spends most of his time developing artificial intelligence capabilities for the firm. He is currently working on AI that would read, comprehend, and interpret financial documents to save human investors time in their financial pursuits.

Andrew was drawn to Morningstar because of its unique business, which allowed him to use both his finance concentration and computer science degree in one place, working on projects he found intriguing. He works in a branch that was originally a start-up and later acquired by Morningstar, which gives it a unique personality. Despite being a part of a large company, he feels that the start-up culture is still a part of their work. “I feel like management encourages exploration of new ideas, and PM’s aren’t constantly trying to micro-manage everything”.

Andrew took advantage of his time at BU by perusing many of his passions. He loved his time in HP, and remembers the field seminar being a special highlight. His class’s trip to Prague allowed him to bond with his classmates while getting a hands-on look and some of the largest and most interesting corporations in the world. He enjoyed the experience so much that he decided to organize a second trip with a group of HP students to attend an Alternative Spring Break trip in Washington D.C., a trip that Andrew recognizes as one of his favorite college experiences. Outside of HP, Andrew took the time to explore some of his other interests, including volunteering at the Jackson-Mann K-8 School, and working as an events photographer for various student groups. He also gained experience by working as an IT Auditor in BU’s internal audit department, interning as an analyst at a seed venture capitalist firm. On top of this, Andrew also worked as a TA for an algorithms computer science class.

Andrew said that students should not be afraid to shift their academic pathway if their interests change. When he came to BU, Andrew took several math classes, and intended to declare that as his major. However, by sophomore year he had begun to explore the idea of Computer Science. He was hesitant; worried that he had wasted too much time with his math courses, but still decided to take the chance. He found that he not only enjoyed computer science, but that the math classes he had taken were extremely helpful in his new path. He was able to get the most out of his BU experience by being open to change, and hopes that other HP students will consider doing the same.

Around this time, Andrew also began to realize the amazing value of our academic advisor, Liz. Being a dual-degree student, he was often under pressure to complete many, often unrelated, requirements. He found that academic advising was able to help him fit in all of his classes, double count classes when possible, and overload without paying more in tuition. He encourages students to get to know their advisor more, and to go to them when they have questions.