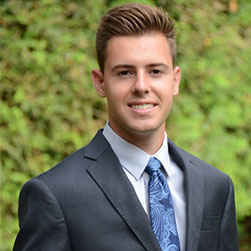 Jeff has always had a variety of strong interests, which made for a very eventful schedule starting in high school. He maintained a challenging academic course load, taking all honors and AP classes, but his schedule outside of the classroom was equally full. Jeff’s leadership positions included Vice President of his high school’s National Honor Society chapter, Freshman Peer Leader, Drumline Captain, and Symphonic Band President. He became deeply involved in music, earning first-chair positions in Regional, All-State, and All-Eastern music ensembles and drumming regularly in a funk/jazz band. Equally passionate about business and agriculture, Jeff began working at HealthBarn USA—a newly founded organic farming and healthy-lifestyle program—and now manages HealthBarn’s organic garden. Jeff credits HealthBarn for teaching him many valuable skills about turning an idea into a successful business and combining agriculture and business skills to promote sustainability. As if this weren’t enough to keep him busy, Jeff was also a member of his high school’s cross country and tennis teams.

Since coming to BU

Jeff entered BU as a music performance major and got right to work on adding a Questrom major. Starting as solely a music major, Jeff naturally became involved with a number of BU’s music groups. He performs regularly with the BU Symphony Orchestra, Wind Ensemble, and Percussion Ensemble and has served as Principal Percussionist in many concerts. One of his most memorable moments at BU thus far was performing at Symphony Hall with the BU Wind Ensemble. Jeff also serves as a teaching assistant at Boston Youth Symphony Orchestras, an organization dedicated to educating musicians in elementary school through high school. Jeff was excited to officially join the Questrom community sophomore year and plans to pursue an entrepreneurship concentration. Having just completed his first semester in Questrom, Jeff is happy to be an active member of the Questrom Honors Program, through which he has volunteered at organizations such as the American Cancer Society and Y2Y Harvard Square. Outside of business and music organizations, Jeff is also a secretary on the BU Chabad Jewish Student Organization Executive Board and enjoys taking ski trips with the BU Ski and Board Club.

In addition to working at HealthBarn USA each summer, Jeff plans and manages organic gardens for businesses and residents near his hometown in New Jersey. He and a friend from high school are now in the process of starting a full-service raised-bed garden business.

Goals for after college

Jeff plans to follow his passion for business and agriculture to promote sustainability by working at an innovative agricultural company. He is particularly interested in areas such as vertical farming and hydroponics. Given that Jeff is a sophomore, his vision is still broad, but he hopes to ultimately start his own agriculture company and invent something—a product or service—that will improve agricultural efficiency and sustainability. With music being an equally strong passion, Jeff plans to perform with professional music ensembles and orchestras after he graduates and plans to continue his music studies. He believes that with enough passion and the right mindset, regardless of the number of interests, there is no such thing as a busy schedule.