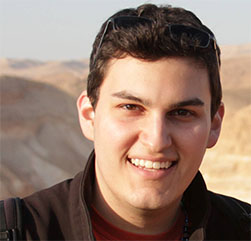 Justin is currently working as a Program Manager for Meow Wolf, an arts and entertainment group located in Santa Fe, New Mexico. The company builds colorful, immersive art installations inspired by original sci-fi and fantasy worlds, such as the House of Eternal Return. As a Program Manager, Justin helps to oversee operations, logistics, and strategies for Meow Wolf’s media department. In addition to building physical exhibitions, Meow Wolf is engaged in multiple forms of digital media, ranging from virtual, mixed and augmented reality, to film, documentary, podcasts, photography, performances, and marketing content. These projects are made to enhance visitors’ experiences and are distributed online to help tell the exhibits’ stories for fans that might not otherwise be able to physically visit a Meow Wolf location. Justin works with the department heads of each media group, making sure that the proper resources are in place to reach Meow Wolf’s goals within each team. Recently Meow Wolf partnered up with Magic Leap, a mixed reality startup, to create the AR experience, The Navigator. By using Magic Leap glasses, users are able to sit inside the pilot seat of a mech sculpture and see an orrery of planets circling one another in AR. The user is then able to adjust the alignment of the planets using a control panel on the sculpture, triggering certain reactions based on the new alignments. With the rapid development of immersive art and media, Meow Wolf is in perfect position to become a household name over the next few years.

Prior to working at Meow Wolf, Justin was a Program Manager at Tugg.com, a crowd-sourcing platform that enables anyone to host film screenings of independent and classic films at their local cinema. Justin was first introduced to Tugg through a tweet sent to the BU Film Society, an on-campus organization that Justin was on the board of during his time at BU. The BUFS used Tugg’s platform to show The 400 Blows, a 1959 French New Wave film, in Regal Fenway. After working with Tugg to host this event, Justin stayed in contact with the company, interning with them to distribute indie films during his spring semester senior year. Justin decided to continue his internship upon graduation, moving to Austin, Texas where the company was located. During his first few months at Tugg, Justin also interned for film director Terrence Malick, for whom Tugg’s CEO Nicolas Gonda was a producer. At the end of the internship, Justin was fortunate enough to receive a full-time offer from Tugg, where he would spend the next four years of his life working up the company ladder. He then joined Meow Wolf after a friend introduced him to the company.

During his time at BU, Justin was heavily involved with both the BU Film Society, acting as their President, and BUTV10 as a board member. Justin first started working with BUTV during his freshman year, editing student shorts for members of COM. Over the years, he would be engaged with multiple projects, including editing CoEd, a parody of The Office, before working his way up to the advisory council in his senior year. He would also gain valuable experience as a Sony intern for Allied Integrated Marketing, creating events across the many Boston colleges to help promote Sony and Columbia Pictures’ films. As is the case with many BU students, Justin took advantage of our immense study abroad opportunities, traveling to Australia for a summer semester where he worked as a production intern.

As for the Honors Program, Justin’s class traveled to Dublin for their international field seminar, gaining an understanding of both the Irish culture and economy. However, Justin got to experience the trip in a different light compared to most of his classmates, as the trip fell on a Jewish holiday. As a result, Justin wasn’t able to take part in some of the activities, instead spending a few days interacting with the locals, learning about Ireland’s industries first-hand, and immersing himself in the culture. Justin is still very thankful to the Honors Program faculty for being so accommodating during the trip.

As evident by Justin’s decision to move to Texas after graduating, he believes in being open to new opportunities and taking the road less traveled. Justin was admitted into the COM internship program in LA after graduating, but declined the offer to accept his role at Tugg instead. For people in film and TV, LA has long been considered the main destination for any graduate, but Justin saw an opportunity to go to a dynamic city with a smaller media community. This allowed him to climb up the company ladder and ultimately led him to his current position at Meow Wolf. If you asked Justin during his freshman year if a kid from Wisconsin would ever end up in Texas or New Mexico working in media, he would have said “no.” However, by taking a chance and responding to a simple tweet during his junior year, Justin has been able to create his own path, putting himself in position to be a part of growing and exciting companies. Quite simply, if you follow your passion, the opportunities will find you. Especially in an industry like film, there is a need for every possible role – from producers to actors to accountants – and focusing on your passions can help open up these doors and lead to a healthy work-life balance.

Additionally, Justin thinks that every Questrom student should take advantage of the soft skills developed through their coursework. As members of the Questrom curriculum, we have the unique opportunity to work on team projects nearly every semester, something that not every school can claim. As with many industries, film is almost entirely team-based, and by developing those personal management skills in courses such as OB221, it will become much easier for graduates to integrate into the workforce and grow to be leaders.

Justin is happy to speak with anyone about BU and life after graduation, especially if you’re interested in starting a career within art and media.