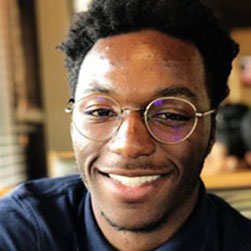 From: West Bloomfield, Michigan | Member of BU Track and Field

Chiebuka attended Brother Rice High School, an all-boys Catholic preparatory high school in Michigan.  While there, he became a member of both the track and soccer team, earning All-State for track during his freshman and senior years.  The athletic drive didn’t stop there, as he ended up being only two belts away from gaining black belt status in karate.  Outside of athletic accomplishments, Chiebuka also demonstrated his drive for academic challenges, becoming a member of his high school’s Quiz Bowl team, which was noted as a “humbling experience”.  He also joined DECA, which helped prepare him for a business curriculum, and was voted as the VP of the student body during his senior year.  When asked why he chose BU, he said the school simply interested him more.  He really liked the idea of joining a community where there were so many different areas of study, and when he sat down to make his pros and cons list, BU swept away the competition!

Since Coming to BU

Chiebuka came to BU as a member of the Track and Field team, focused on sprinting.  During his freshman year, Chiebuka helped BU earn gold in the 4x100m at the Patriot League Championships.  On top of that, Chiebuka made the Patriot League Academic Honor Roll, and set a personal best 100m time of 10.86.  He also became a Residence Hall Association treasurer during his freshman year, an experience that he views as one of the most interesting roles he took during freshman year.  Since the beginning of Sophomore year, Chiebuka has focused a lot of his attention on developing his own fashion label and designs.  Polyman, the name of Chiebuka’s official LLC brand, first started out as a broad media and fashion label during this past summer.  Chiebuka at first wanted to provide videos, pictures, social media posts, motivational quotes, and clothing all through this one label.  However, he eventually realized that it would be best if he first focused on stabilizing the brand before entering all these areas, and decided to spend this semester developing the clothing portion of the company.  So what kept him motivated to complete this task?  He made it his semester project for the first HP seminar.  Chiebuka is now preparing for a fashion show with FAB (Fashion and Retail Association), where he will be one of the selected designers.  Once the show is over, Chiebuka hopes to roll out a clothing line within the next few months.

Chiebuka will try to continue running for as long as he possibly can after his time at BU.  With the 2020 Olympics being only a month after graduation, Chiebuka hopes to possibly extend his career on either team USA or Nigeria.  He will also look into other competitive running options, trying to gain some form of sponsorship from an athletic company.

While it can be difficult for a sophomore to know exactly what they want out of their post college career, Chiebuka states that he just wants to be able to do something that will leave an impact.  Giving back to the community and providing resources to people who don’t have proper access to them has always been important to Chiebuka.  He’s seen people in both Detroit and Nigeria come from very limited backgrounds, and wants to produce a business that can help people in these situations, while also leaving behind a legacy in the process.  If possible, Chiebuka would like to continue his fashion brand business, possibly using this company as a source for his desire to help.  While much is still undetermined at this point, Chiebuka does know one thing; he wants to remain in a city environment.  It seems as though the BU campus has really grown on him!

An Nguyen
Scroll to top