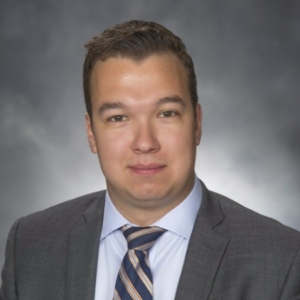 Today you can find Theo working at SunTrust Robinson Humphrey in their Corporate Banking Division in Boston.  Theo works with many midsized companies to evaluate potential areas for growth and acquisitions, advise them on how to use their money, and determine the best ways to raise needed funding.  Theo’s team looks at both organic and inorganic ways of growing a client’s business, with organic growth coming from selling more products, and inorganic growth coming through mergers and acquisitions.  Bond issuances, loans, and new or additional equity (shares) make up some of the products his group sells.  If you are interested in the banking industry, Theo advises that you decide between the public (trading) and private (banking) side as soon as possible, as this allows you to focus on making connections and attending events specifically for the industry division of interest.

Theo was a member of the last class who had to receive admittance into the honors program at the time of their initial BU high school application.  Interestingly enough, Theo was actually accepted to BU as an IR major.  However, a wealth management internship at Merrill Lynch during the summer before freshman year quickly changed his mind.  Theo immediately called BU to figure out how he could transfer into Questrom before the year started, and by working with the administration, he was able to transfer before orientation even began.  Shortly after the transfer, Theo heard about the Honors Program and decided to call back to ask about joining the program.  Sure enough, he was able to gain admittance and became a member of the HP family!

During his time at BU, Theo was an active member of the Finance and Investment club where he became an Investment Associate.  As an IA, he was often found working on new investment recommendations for the program.  Additionally, Theo was a Dean’s host throughout his four years at Questrom, and was hired as a teaching assistant for a corporate finance graduate level course for Law students during his senior year.  He was also an active member of the BU Kappa Sigma chapter.  During his junior year, he studied abroad in London where he was able to intern at Barclays.  This internship would eventually lead to a future internship at HSBC, and eventually a full time position at SunTrust.

Theo suggests that every student should reach out to alumni as much as they possibly can.  The honors program makes for a very strong network of both current and past students, and having this program in common with someone else makes for an easy introduction to a conversation.  This can be as simple as sending out an email asking the alum when they have some free time to chat, and then seeing if they can grab a cup of coffee with you.  Alumni aren’t going to be the ones who reach out first, but they are more likely to reach out to students in the future if they’ve already built some form of relationship.  Theo also believes that students need to take advantage of as many alumni events as they can.  Many times students miss out on great networking opportunities because they are worried about getting their work done on time.  However, the professors here at BU all understand what it’s like to be searching for your first career field, and are generally very supportive of students sometimes prioritizing events, so long as it is done in a respectful manner and the student works towards completing his/her schoolwork.

If company culture is important to you Theo has one piece of advice: the best way to understand the culture of the company you are interested in is to focus on the specific team you’ll be working for.  If you’re working in an office for a company, then your priority should be to talk to people within that office.  These are the people you’ll be spending every day with, and while their culture can be impacted in some ways by the overall company structure, it’s the people within the office who will really determine how you feel about going to work every day.  Just like in CORE, team dynamics are everything and being able to get along with members of your team and find similarities in values will make for a much more positive experience.