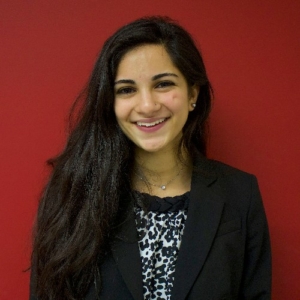 Concentration: IS and Operations with CS minor | Incoming Technology Consultant (Cybersecurity Advisory) at PwC in NYC

Sabina was heavily involved with her high school community, joining groups such as the Speech and Debate team, Model UN, and the Project Adventure Peer Leaders; helping freshmen with their transition into high school. Sabina also spent a large portion of her time at her elementary school working as an After-Care aid and summer camp counselor. It was through these experiences that she discovered her passion for leadership opportunities. For instance, as a Speech VP during her senior year, Sabina was in charge of multiple administrative tasks to keep the group members organized, and more importantly, implemented initiatives to improve the team dynamics. Sabina is certainly somebody who leads by example, which can be shown by her over 400 community service hours during her high school tenure.

When it came time to decide the location of her next chapter in life, Sabina picked BU for two major reasons. For starters, Sabina was already familiar with Boston and the BU community, as her older sister was at that time a freshman at the university. Additionally, Sabina’s mother was a Simmons alum and her uncle was a BU alum, helping her learn even more about the college experience within Boston. While initially hesitant about applying to the same college as her older sister, Sabina eventually decided that BU was the best place for her undergrad career shortly after an open house event. She enjoyed the urban campus within a small city, the close proximity to the Charles River, and her multiple conversations with both BU staff and students.

Sabina’s other major criteria behind choosing BU was the academic flexibility the school provided. Sabina came to BU as an undeclared CAS student, and was assured that the transition process into a different major would be made as easy as possible. While other universities put quotas on the number of students allowed in their business programs, BU made it possible to postpone your business major decision past the typical first semester freshman year requirement at other schools. Sabina also appreciated the fact that BU labeled their students as “undeclared” rather than “undecided,” as “undeclared” seemed to mean that you had an idea of what you wanted and didn’t want to study, you just hadn’t formalized it in writing, whereas “undecided” has a slightly more negative tone. Sabina also felt that BU not only had racial/ethnic diversity, but also brought people of different backgrounds and experiences together to share their unique identities with one another.

Since coming to BU

There’s a reason why Sabina was recognized by her peers at graduation as both a Scarlet Key recipient and Dean’s Community Service award. Sabina has been heavily involved within the BU and Questrom community since her freshman year. She has held a VP role with LOCK, an Advisory Board position for the honors program, a TA position for SM151, a Co-Director of Academic Affairs position for BU Student Government, an Admissions Ambassador role, an Executive Board position for the Public Market Investing Group, a Lead Mentor role for Debate Mate USA, and worked as a Research Assistant at MIT Sloan, just to name a few. Sabina also served the Greater Boston community as a Team Leader through Jumpstart, volunteering in preschools within low-income communities. While Sabina has enjoyed each and every one of her experiences, two of her major accomplishments came through her roles in LOCK and Student Government. In Student Government, Sabina led a group that created 2,000+ care packages for students to have, at no cost to them, each study period. She also helped improved the “Tutoring in the Dorms” initiative, bringing CAS Writing Center Tutors to three dorms on campus for students to use as a resource for final papers. Within LOCK Sabina helped to implement a tutoring certification process to prepare tutors for their sessions, and help improve the collaboration between professors and course teaching assistants.

When it came to selectin her major, Sabina took full advantage of her intro courses and conversations with professors to understand the different aspects of each concentration.

She suggests that students look at the class list for the concentrations and see what they’re interested in, ultimately choosing the concentration that has classes you actually want to take. In the grand scheme of things, your concentration is only 3-5 classes, and does not really dictate what career you go into, so you should just go for what you’re interested in. If you’re ever wondering what is involved within a concentration, it’s always a great strategy to reach out to professors and upperclassmen, especially HP upperclassmen. Additionally, taking some classes outside of Questrom can be a great move, as they widen your breadth and understanding of things personally, and make you stand out to employers looking for a well-rounded individual.

Like most people in HP, Sabina’s favorite part of the program was her class international seminar to Chile. The Chile trip was Sabina’s first time traveling outside of the country without her family, and made for a great bonding experience with members of her 2018 class. The trip was described as “well-organized with a perfect combination of cultural activities and professional opportunities.” Her favorite part of the trip was climbing on the rocks by the Pacific Ocean on the way to Valparaiso, looking out to a beautiful view of the water. Aside from the trip, Sabina also enjoyed organizing and participating in many community service events. Some that stand out are Belle of the Ball, VisionWalk 5K, and Common Care. These events not only were a way to give back to the community, but were also a great way to connect with other HP members, especially across different grades.

Goals for after college

Sabina will be joining the Cybersecurity Advisory team at PWC’s New York City office. Looking for a constantly changing work environment and a heavy level of client interaction, Sabina felt that the consulting field would make for the best career path following graduation.  However, her internship experiences with both the Foundation Fighting Blindness as a Development Intern her freshman summer and the Ford Foundation as an Information Management Intern during her sophomore summer helped introduce her to the social sector. Through these experiences, Sabina gained a desire to do something positive for society with her business degree, possibly either joining or starting a non-profit organization. While she initially thought about entering the non-profit field upon graduating, her work with these foundations helped her realize that there isn’t much initial growth potential within non-profit organizations, thus making it difficult to make a growing contribution over time. Instead, Sabina decided that it would be beneficial for a future non-profit if she worked at a large organization first to gain experience, resources, and a network that would help her learn all the skills that could make her return to the social sector as impactful as possible.

While she will certainly keep herself busy within the consulting and non-profit fields, Sabina also has entrepreneurial aspirations. During her last year at BU, Sabina began experimenting with making pour-over coffee, trying different types of coffee beans throughout the year. While Sabina doesn’t consider herself a “coffee connoisseur,” her experience with coffee has been an enjoyable one that has helped develop new long-term goals. Sabina now hopes to one day open up her own coffee shop or bed & breakfast, helping bring people together through food, coffee, and conversation; just like those famous coffee and conversations with Dean Reiser!