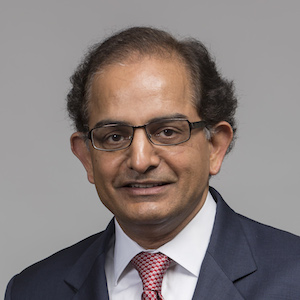 Tues 9/30, 10am – 11am EST
Forum: Challenging the Business Model of Education

From 2007-2009, he was Dean of the Nanyang Business School (NBS) at Nanyang Technological University (NTU) in Singapore, one of the leading science and technology universities in Asia Pacific. During this period, he was Shaw Foundation Chair and Professor of Strategy, Management and Organization at Nanyang Business School. In addition, at the university level, he was a member of the University Cabinet of NTU, and Chief Adviser, India Strategy to the President of NTU. At the end of his term as Dean of Nanyang Business School (NBS), their MBA program was ranked #24 in the 2009 Financial Times rankings, and was rated as one of the leaders in the Asia Pacific region.

He has been a faculty member at the Wharton School, University of Pennsylvania, since 1987 where he was the Saul P. Steinberg Professor in the Department of Management before moving to HKUST. During 1998-2001, he was Vice Dean, International Academic Affairs. In his Vice Dean role, he was a member of Wharton’s core administrative leadership team and was charged with shaping and implementing the global strategy of Wharton. These efforts culminated, in part, in the worldwide alliance between Wharton and INSEAD, the foundation of Indian School of Business in Hyderabad, India and the creation of Singapore Management University in Singapore. Earlier, he was Director of the Emerging Economies Program at Wharton from 1996-98. From 1991-1995, he was Research Director, Entrepreneurship at the Sol C. Snider Entrepreneurial Center at Wharton, the leading research center in entrepreneurship at any US business school.

He moved to Wharton in 1987 from University of Toronto, Canada where he was an Associate Professor (with tenure) in the (now) Rotman School of Business. In 1991, he received an M.A. (honoris causa) from University of Pennsylvania. He received his Ph.D. from Stanford Business School in 1983. His earliest education was in natural and mathematical sciences and he received his B.Sc. (Physics, Mathematics, and Statistics) from Lucknow University, India. Subsequently, he received his MBA from the Indian Institute of Management, Ahmedabad, India. He worked as a line manager at Voltas Ltd., a Tata group company, in India for three years before coming to the US for his Ph.D.

His research and teaching interests focus on strategy and organization, with a specific current interest in emerging multinationals and business leadership in India.

Jonathan Spector, President and CEO, The Conference Board