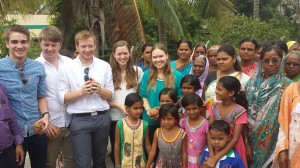 Arriving in Pune, the first cultural difference to hit you is the impossibility of crossing a street. Returning to our new home at the College of Agricultural Banking in Pune after standing as naïve westerners on the pavement for half an hour, we realized we were far from the comforts of working traffic lights, orderly queuing and unnecessary apologies. We were immediately thrown into research on financial inclusion, micro-enterprises, foreign exchange and currency management; receiving lectures from experts within the faculty. Our first week has involved experimental yoga classes, new insights into the Indian banking sector and curry for breakfast, lunch, and dinner. We were also given the privilege of attending a field trip along with faculty members of the college.

‘There are five principles of humanity; pure thought, pure action, strength of character, sacrifice and humility’

These were the words spoken to us by Anna Hazare, an Indian social activist who led movements to promote rural development and increase government transparency. He is considered the ‘new Gandhi’ and is regarded as a national hero, who has transformed Ralegan Sindhi (the village of liquor) to Ralegan Siddhi (a village who has achieved its goal). A sole survivor of a Pakistani assault, which killed all his comrades, he returned to his home village dedicated to devoting his life to social reform and engaged in projects to conserve water, stockpile grain, develop new dairies, plant trees, end caste divisions and build schools and training institutes. It was almost overwhelming to witness the constant stream of villagers flocking to the temple to kiss his feet and pay respect.  Yet Mr. Hazare has his critics. As interns, before attending the field trip we engaged in the standard Wikipedia search of Anna Hazare to find some drastic policies on the flogging of village drunkards. As Newcastle students partial to the odd treble, the idea of a public thrashing for being caught in Sinners appealed to none of us, and it was tempting to disregard him as an authoritative extremist who used fear and intimidation. Yet on meeting Mr. Hazare, you cannot deny the economic transformation he has achieved in what once was one of the poorest villages in Maharashtra filled with hopelessness, illiteracy and alcoholism. He sincerely regards the entire village as his family stating that although he has ‘forfeited a family’ by devoting his life to the village and his work, ‘he has gained an even bigger one’ considering the villagers as his own children. Mr. Hazare’s methods may not work in Western society; however, his achievements in Ralegan Siddhi include increasing literacy rates to 100% in the village and raising per capita income of the villagers from Rs. 225 to Rs. 2500. One principle he does share with Westerners is that you must ‘lead by example.’ At the beginning of his journey to achieve social reform, the village was unsanitary, and people would defecate in the streets for lack of infrastructure. Every day Mr. Hazare would clean the streets until others began to join him and eventually worship him.

Our field trip also took us to meet five self-help groups working with an NGO to help provide financial support and growth for the community. We were welcomed with coconuts and told about the benefits of the group in teaching the women new skills such as making incense sticks, which provides wages. The group has proved essential in times of need such as when one of the member’s daughters fell ill and had to pay 10,000Rs for treatment. The mother was able to take a loan from the group immediately with a 2% interest rate. A bank is unlikely to issue such a small loan and a money lender would have provided the loan at a much higher interest rate, making the self-help group undeniably beneficial. We were also given the opportunity to visit one of the only successful co-operative banks in India, The Ahmednagar District Central Co-operative Bank. Welcomed with roses, tea and our own plate of biscuits, we discussed the performance report and learned that establishing trust with your customers is one of the key components to success in co-operative banking.

Overall, we have had a great first week and look forward to future challenges, experiences and rickshaw rides in the next five weeks.