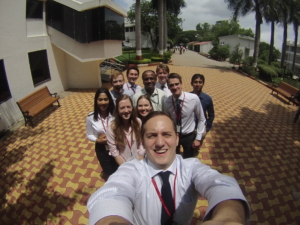 Week four had a slower feel due to the lack of a mid-week adventure for the whole team, but it was just as exciting as the others. While the beginning of the week was rather uneventful, we were lucky enough to have our first hands-on experience with the Indian wildlife on Wednesday without even leaving our office. It caught us by surprise – we originally mistook the squeaking in the wall as a sign that our air conditioning system was failing us, until we saw a head pop out. It was horrifying and humorous, and nobody was sure how to handle it. What we thought was a rat soon spread its wings, and as it left the comforts of the wall, we left the comforts of our office, confused and amused. It was a bat, and nobody knew what to do until a brave local managed to corner it, capture it, and release it back into the outside world. Everything was well again until another bat flew out of the wall while a maintenance team was trying to fix a leak in the room. 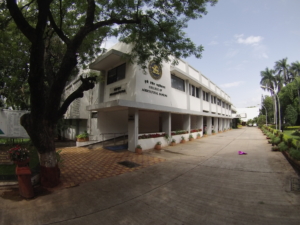 Other than Chris and Courtney conducting surveys and field work on Thursday, the team’s first outing of the week occurred on Saturday with a visit to Symbiosis International University’s School of Banking and Finance on the outskirts of Pune. Symbiosis was unique compared with the other universities in the area because of its very diverse student body with people from all around the world. During our visit, we observed many presentations from faculty members about their research on financial inclusion while many of the graduate students presented their field work on the issues of microfinance and financial inclusion. During the Q&A session, Vicki raised a question about whether or not India could adapt a similar system to Kenya’s mobile banking system. To our surprise, a Kenyan graduate student at Symbiosis was in the audience. He got up and spoke about Kenya’s system, mentioning how their decision to adopt mobile banking technology wasn’t based on extensive research and collected data; instead, people asked the mobile companies for the technology, and they made it work. In his opinion, India has the capability to do this as well, and he said that people just needed to act on it and make it happen. In other words, his philosophy was best summarized with Nike’s company
motto: Just Do It. Everyone in the room was very impressed with the way he spoke, and we were glad to hear his perspective on an issue relevant to financial inclusion in India. After the presentations, we were asked to come to the podium and speak about our own experiences in India and at RBI. We were asked about the differences and similarities between our homes, education, and life experiences, though as a member of the audience stated at the end, “we’re all human.” After all of this, we were treated 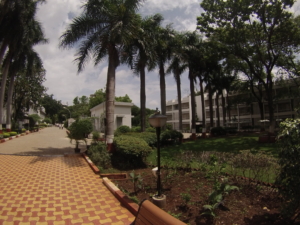 to a fantastic lunch at the Symbiosis guest house on top of a mountain
with fantastic views of the surrounding landscape.
At this point in the trip, we are beginning to realize just how little time we have left. We hope to make the most of it by continuing to immerse ourselves into the Indian culture, and it’s safe to say that we’re all very excited for Thursday’s visit to meet RBI’s Deputy Governor and see the 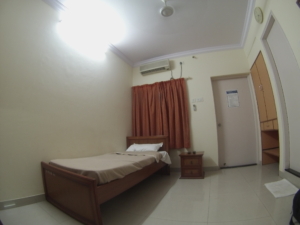