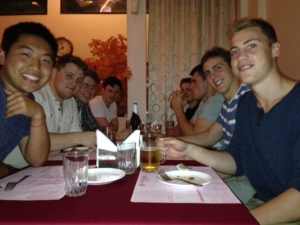 As we nervously descended on the canteen for our first meal, it suddenly became apparent that this was to be our first meeting with the American half of our entourage. From our very first encounter, it was clear that the special relationship had begun. With a symbiosis on a level that we have never before experienced, our eight hearts beating as one.

This spiritualism was demonstrated when we found ourselves unexpectedly taking part in the Hindu culture, with an early morning knock at our door by the campus’s Zen master. Morning yoga has brought peace and tranquillity into our daily routine and our instructor has showed us that frequent meditation relives stress and will reduce the risk and likelihood of cardiac arrest. Sessions run an hour long, Monday-Saturday, and are filled with unique routines to jumpstart our days. Although we are just beginners and learning the correct poses and proper breathing techniques, we believe that six-weeks of dedication will mold us into life-long yogis. 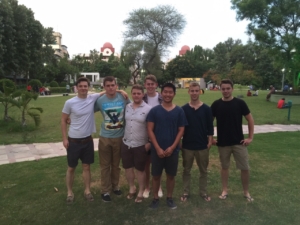 With confidence brimming one evening after a couple of days of acclimatization, we ventured out for our first journey into downtown Pune. With rickshaws our chariots, we raced through the streets. A cacophony of horns accompanied us en-route to our destination Koregaon Park, a cosmopolitan district which provided a multitude of bars at which we sought to quench our near insatiable thirst.

Our time outside of the long slog of the work hours are spent doing a variety of activities. Long, mild evenings are spent playing cards on the roof terrace in the company of a hoard of resident Indian short-nosed fruit bats. Outside of our Yoga workouts, we also play football (occasionally joined, and ultimately shown up by members of the various training programmes run on campus). Recently table tennis tournaments have become incrementally more competitive in a similar vein to Wimbledon, which some of our party follow religiously. 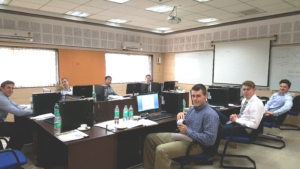 The work aspect of the internship started slowly. After being shown to our office for the next 6 weeks, we took our places to begin preliminary research for our projects. Our education is however not solely limited to bank function. The members of faculty have all been determined to ensure that at every turn we are well looked after, but also gain an understanding of the history and politics of India. A communal screening of Richard Attenborough’s critically acclaimed ‘Ghandi’ gave a harrowing account of India’s fight for independence, as well as providing a sense of perspective, allowing us to see how the country has grown and developed. For many of us, this has evoked a period of reflection which is perhaps best encapsulated in the words of Robert Holden:

‘Each of us is called to do something in the name of love, to make sure that humanity comes to understand itself and is able to choose love over fear’.

Jewel of the East: Week 3 at RBI
Indian Driving, Shopping Malls and Soccer: Week One at EDI

Ahmedabad, India: An Introduction to a New Place
Scroll to top