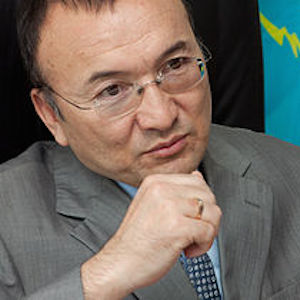 Wed 10/1, 9am – 10am EST
Forum: Increasing the Value of Management Education

One of the founders of the first business school in Kazakhstan – Almaty Questrom School of Business, created in 1988, and later transformed into International Academy of Business. In 2011 received the degree of Doctor of Business Administration at the Graduate Questrom School of Business of the National Research University “Higher School of Economics” (Moscow, Russia). His teaching career started at the Continuum Mechanics department  at Kazakh State University named after S.M. Kirov (now known as al-Farabi Kazakh National University). Later Kozhakhmetov taught at the School of managers under the Kazakh Republican Association “Soyuz”. He underwent a specialized management training in training centers in Germany, France, UK, Belgium, Holland, Hungary and Estonia. Dr. Kozhakhmetov combines his professional career with public work. He is currently a member of a Working group responsible for revising Education law; member of the Expert Council of the Academy of Public Administration under the President of the Republic of Kazakhstan, Deputy Chairman of the Public Council of National Democratic Party “Nur – Otan” on consideration and resolution of social conflicts. He is the author of more than 60 works on management and education development. He received the “Excellence in Education of the Ministry of Education and Science of Kazakhstan” award (1998), the “Torch of Birmingham” award from the international organization “People to People International”, USA (1997), and was decorated with the Jubilee Medal “20 years of Independence of the Republic of Kazakhstan” (2011). In December 2013 Dr. Assylbek Kozhakhmetov holds the highest state award – the Order of Kurmet of the Republic of Kazakhstan.